German designed and made, superior both in manufacturer and design, this is intended as a large animal wide blade expressly for use on horses and has quickly become recognised as one of – if not – the best “detachable|” steel wide blade for use as a “full body” clipping blade not only on a range of horse’s coats, but many other animals as well.

This blade should not be confused with the virtually identical looking Moser wide blade (reference number: 1245-5840), which has been developed expressly by Moser for their Horseline range of clippers – The Avalon and Artiko – and is a highly successful blade when used on a variety of horse coats as might be expected.

A close examination of both blades will reveal five distinguishing features of the KM1221-5840 standard blades, in comparison with the rather similar looking KM1245-7480 fine blade.

Third – the cutter blade teeth on the fine blade are set a fraction closer to the ridge of the lower or comb blade, about 0.10cm

A number of similar looking blades in both design and shape are available from several manufacturers of “detachable” blades, but it is worth remembering that many blades will have originated as blades intended for use on larger dog breeds rather than having been specifically designed for use on horses. Moser appear to have designed this blade specifically for large animals including clipping of horse’s coats, and as such it has proved itself one of the best available for use on many types of horses. It certainly succeeds in many cases, where others fail! When closely compared with other identically looking makes it will be seen that there are differences in the teeth shape and length, and the profile angles.

Field use suggests that this blade works well on most Thor’bred coats and several cob types, for which the blade is widely marketed. It has also proved itself equally at home on cattle for quality exhibition clipping, and especially successful when used with alpacas tackling the dense thick and long coats with ease.

There is evidence to suggest it is not entirely happy when used on the coats of the Shetland horse breed, although in fairness if allowed to do the work and not “pushed” by an “in a hurry” operator it will complete the task. Occasionally one finds the odd cob or native to whom the blade appears not be totally suited, but generally all end-users speak very highly of it.

In cases when difficulties are experienced – such as the odd occasions when the standard blade clips, but leaves “wisps of hair – it can often pay to use the KM1245-7480 finer wide 2.3mm blade. In many cases you will experience complete success.

Feathers and coarse leg hair can cause problems for many blades not only of this type, but also many of the larger traditional clipper blades. They just don’t like clipping in this area! Some will do it but with a struggle! Often you will find this area is best tackled not with a more open and fewer toothed narrow type detachable blade which might be consider the best suited, but with a surgical ##40 “53” tooth blade!

Clearly “surgical” gives the concept of “extra close” clipping and the way to combat this is to use an attachment comb – say a 1/16th or even a ¼-inch to give added height and allow for a better covering of hair. The #40 blade is also highly successful for hogging manes.

PLEASE NOTE:
All “CERABLADES” have now been discontinued and customers are advised to use the “steel” versions

The sales “philosophy” was that the “CeraBlade” with its ceramic coating would enter the coat texture with greater ease than a steel blade and that the cutting edge would remain sharper and therefore clips longer.

However practical experience highlighted a problem with re-sharpening!

Unfortunately the coating of ceramic powder sprayed onto these blades at the time of manufacturer was found to interfere with the lapping process when re-sharpening and this created a situation where certain individual blades could not be correctly sharpened to MOSER factory standards.

Owners of the clippers or trimmers using the CERABLADE should not necessarily discard these blades as normally after several re-sharpening processes they lose the ceramic powdering on the sharpened blade faces and as such therefore revert to the original pure steel 2.3 wide detachable Moser blade, and would then be expected to thereafter re-sharpen to a professional cutting standard.

PLEASE NOTE: Whilst we are happy to sharpen these blades for customers it should be understood that initially for the first few occasions of re-sharpening variation in both cutting performance and the clipping duration of individual blades should be expected to vary between clips. We regret we cannot guarantee quality performance in every instance when re-sharpening “CeraBlades” until they have been done a number of times.

IMPORTANT CUSTOMER INFORMATION – November 2014
Currently customers are advised not to use this Moser wide blade on any of the three Aesculap FAV5 models (GT105/GT306/GT308) due to a problem correctly engaging the blade.

There are no reviews yet. 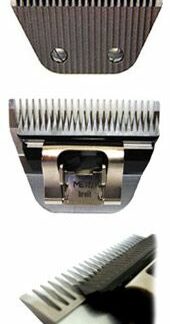